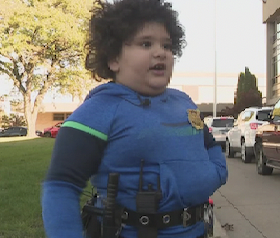 Aktham Aleiwi wants to be a police officer when he grows up, and he's getting his start as a traffic helper. MOLINE, Ill. — A little helper is working alongside the Moline High School detective liaison officer. Five-year-old Aktham Aleiwi comes with his dad to pick up his sophomore aged sister from school every day.

"Day one of school the dean and I came outside to do our supervision duties on the Avenue and we happened to see him here and took him in the squad  car one day," Lopez said. "And the next day he came with a full uniform directing traffic."

It's been that way ever since, with Aktham helping lead the way after school.

"Have a nice day ma'am," says Aktham, "It's just good being a police officer!"

Detective Lopez, describing him as his backup. The five-year-old is decked out with all the necessary gear, showing off his badge and police utility belt.

"This is a gun that's for cops, and then a walkie-talkie, and then this to make the cars come," Aktham said. "And then I also got police pants and black shoes."

His sister, Marwa Aleiwi, says it was a welcome surprise to see her little brother outside the school when he first started. She hears other students talking about it sometimes, saying it's always "just a laugh."

"I can kind of hear people behind me talking about him and I just laugh," Marwa said. "He would like to do that when he grows up."

Waving his baton and holding up his hand with plenty of authority, Aktham doesn't miss a beat when it comes to telling the cars and students what to do.

"Every day Monday through Friday he is out her directing traffic," Lopez said.

The pint-sized police officer is all business, and makes sure people are following the rules outside the front of the school.

"I just give them tickets for speeding and then if somebody is still not listening I can arrest them with these handcuffs," Aktham said.

Detective Lopez says it brightens everyone's day to see Aktham keeping up with his duties. On top of that, he's happy to see someone so young interested in helping others.

"It's great feeling that people at that age want to be a police officer, want to do the right thing," Lopez said. "So it's exciting."